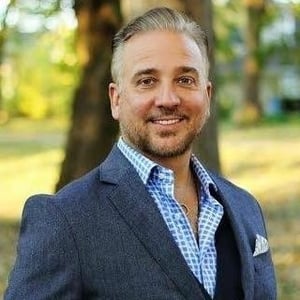 Jim began his yoga practice in 1997 in search of a way to maintain physical flexibility after years of running and martial arts had begun to take their toll. After a few months of practice Jim was introduced to Gabriel Halpern, director of The Yoga Circle and he began his apprenticeship in Iyengar yoga. Jim worked with Gabriel for two years in his therapeutic and ongoing classes learning both how to teach asana and how to apply them to deal with chronic pain and injuries. Jim began teaching his own classes in 1999.

Jim has been teaching classes at LPAC since the day the doors opened and over the years he has amassed over 6,000 teaching hours at LPAC and at multiple studios throughout Chicagoland. In a continuing effort to grow and diversify, Jim has studied and practiced with countless mentors in dozens of styles of yoga. In a typical class Jim will blend aspects of detail and alignment work with vinyasa flow in an effort to create a symphony that includes both sounds and silence. Jim seeks to replace the physical flexibility he has lost over the years with a glimmer of mental flexibility gained from time on the mat.