Why Tossing out My Skinny Jeans Felt Great 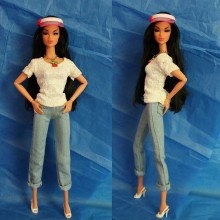 I held up the jeans. They were so teeny tiny. I couldn’t even believe I once wore them. And that I had kept them for so long.

For six years, they had been tucked in storage. All this time, I had held onto the jeans, thinking that maybe, some day, one day, I could slip back into them. Whenever I lost a few pounds, I would pull out the jeans and try them on, hoping they’d fit. They never did. And every time they didn’t fit, I would feel terrible about myself for still not succeeding.

But on this day, when I took them out of the musty storage bin, I didn’t feel sad. I even didn’t attempt to try them on. I gently folded the jeans, and carefully placed them in a bag of clothes to donate. There was nothing to be upset about. These jeans were part of my past, but would no longer be a part of my future.

It felt good to say goodbye out my skinny jeans. Because I’m not skinny anymore, and probably never will be again. And I am perfectly fine with that. I think. Well, at the very least, I can say I’m getting there.

For several years, those jeans had represented something I once was and was forever struggling to be again. But now, I don’t mind that they represent an old me. Because I’m starting to be okay with not being that person anymore.

The past me was skinny. I ran all the time. I ate whatever I wanted, then I ran it off. Running was my only exercise. While it kept me fitting into those teeny tiny jeans, I had terrible posture because I had a weak core and back. I convinced myself it was okay because I was “a runner.”

It was an unhealthy lifestyle masked in healthiness, and it wasn’t until recently that I realized how poorly I had been treating my body. So I decided to make new goals that had nothing to do with my size.

Instead of idolizing a certain size or weight, I’ve been trying this new thing. After three months of (mostly) steering clear of the scale, prioritizing building strength over burning calories, and eating more vegetables than I probably had in the previous year, I’m starting, ever so slightly, to move away from putting that past “skinny me” on a pedestal.

Here are a few changes I’ve tried to make:

And believe or not, I’ve started feeling better — both with my energy and in my own skin.

More Room for the Good Stuff

Now I’m only three months into this “new me.” So that doesn’t mean I’ve totally put the concept of pants sizes or numbers behind me. But I have noticed a shift. As I’ve focused my energy on other things, I have less mental energy to care if the teeny tiny jeans fit.

Instead, with my new focus on getting stronger, I’ve had to make room to eat more protein and veggies — leaving less room for pizza. I log meals on MyFitnessPal to make sure I’m getting enough nutrients throughout the day — not to see if I’m under a certain number of calories. I’m dipping my toes into the standing desk waters because I think it might help me with my posture — not because standing will burn an extra 50 calories.

Generally, I’m striving to make room for the good stuff, which leaves less room for the bad stuff; and that bad stuff includes beating myself up over a pair of 6-year-old jeans not fitting.

I’m finding less space to store those jeans. Less room for going back to the “I can eat whatever I want because I run all the time” girl who wore them.

I’m still running, and I’m getting ready to start training for my next marathon. But I’m coming at it from a different angle. I fell into a slump while training for my last marathon. I wasn’t eating well, lacked energy, and constantly felt sore. To avoid injury, I had to scale back my training and accept that I would not finish close to my goal time. Though I finished the race, I hadn’t treated my body well leading up to it and I felt like a failure.

This time, I know things will be different. I may even dust off that sub-4 goal time again. If I can continue to take care of myself, running 26.2 miles in under 4 hours will be a realistic, totally attainable goal. And maybe if I hit it, I’ll buy myself a new pair of jeans. Heck, even if I don’t hit that PR, I think I still deserve a new pair of jeans. Because I have room for another pair now!

Swimming, Sports, and Mental Health: Effects of Fitness on Wellbeing

Why should I tri? Getting started with Triathlon Training