Working Out Wearing a Mask

Hearing we'd have to wear a mask during indoor workouts in Chicago may have raised some questions for you. Is it safe? How will I feel? This may even be the reason you haven't returned to indoor workouts yet. So, we did some research on how to make working out in a mask safe for you. And, we asked Chicago Athletic Clubs' Fitness Director, Sarah Ruhl, to tell us what her experience has been like working out in a mask since we've reopened. Here's what she shared:

I must admit, I had a flurry of emotions when I learned masks were required during physical activity: I was scared, worried and frustrated. Not only had my physical activity decreased by less than half since the clubs closed in March, but now I would have the added challenge of a face covering when working out and exerting myself. But, after my first masked workout, those fears were dispelled. And now three weeks later, I have to say I almost don’t even realize I’m wearing a mask when working out. My body has adapted and become more efficient at metabolizing oxygen.

My first workout when we re-opened was a Studio Cycle class and I wore a disposable surgical mask (lightweight, durable, effective). About 15 minutes in, it was sweaty and sticking to my face, but I could still breathe. I took the intervals easier than usual with lighter resistance and slower speed and was surprised by the end of the 50 minutes how I felt. Yes, it was noticeable that my breathing was restricted and I did fatigue faster, but I honed in to my own Perceived Rate of Exertion on a scale of 10 and made sure to recover after higher intensities. See chart “Tuesday, 7/28 Studio Cycle” below. My overall effort for this first class was 53%.

Same class, same intervals in week two was better. Again, I wore a disposable mask, but I was used to it and it felt easier to get air. See chart “Tuesday, 8/4 Studio Cycle.” My overall effort decreased to 50%.

In week three, I wore a new, “athletic” mask made of nylon mesh and cotton, adjustable Velcro straps and non-slip ear cords. This one didn’t slip or stick to my face and I could breathe more regularly. See chart “Tuesday, 8/11 Studio Cycle.” My effort dropped to 46%. I’m now comfortable wearing the mask and I’m recovering faster. 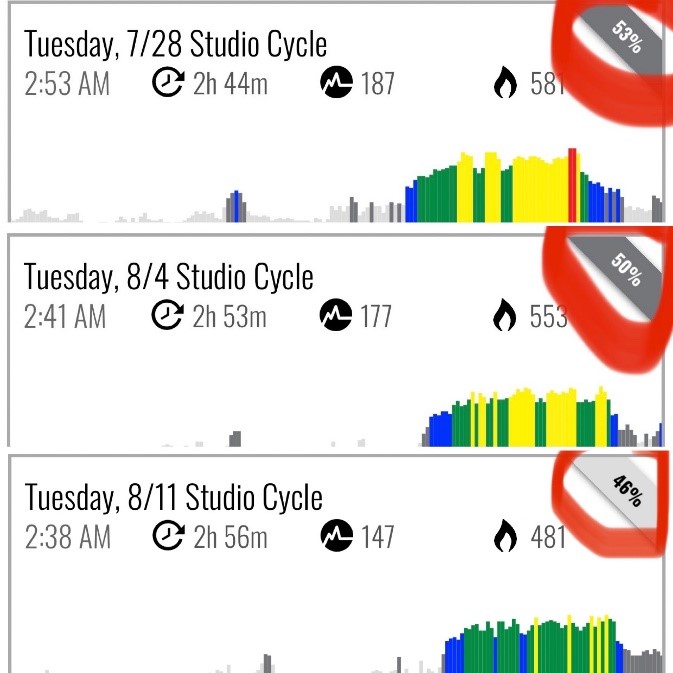 Where Can I Take Indoor Cycling/Spin Classes in Chicago?

Why Yoga should be part of your weekly routine

September is Yoga Month at CAC!