When Pushing Through the Pain is Stupid 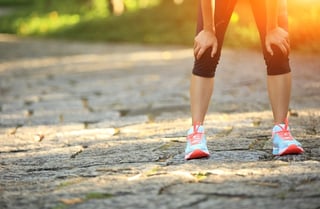 As a high school cross country and track runner, our coaches often encouraged us to “push through the pain.” So I did. I trudged up hills, ran countless intervals around the track and never ever stopped to walk when the coaches weren't around like some other girls did.

I was excellent at pushing through the pain. I never wussed out because I had shin splints (luckily because I never did.) I did not believe in weakness. Though I was not particularly fast, I was a push-through-the-pain champion. I deserved a Push Through the Pain trophy.

I carried this “push through the pain” mantra with me as I moved onto adulthood. I’ve pushed through several marathons, a triathlon, a 14-mile obstacle course and countless of other races. Then I started adding more strength training to my workouts and learned new forms of pain. I cursed said pain in my head, but I pushed on. I believed that giving into pain was just an excuse for not wanting to challenge yourself and get better. I was the teacher’s pet in every class because I always gave it 110%.

But now that I’m pushing 30, boy am I realizing my commitment to pushing through the pain could really just set me up for disaster.

When “Push Through the Pain” is Baloney

In my “old age,” my body isn’t bouncing back as quickly as it used to. I first realized this when I tried to amp up my marathon training in too short of a time period. It was overtraining masked as “pushing through the pain.” And it was not going to land me my marathon PR; instead, running miles on top of miles without giving my body time to recover was a surefire way to end up with an injury. So I stopped pushing through the pain and reduced my mileage. I finished the 2014 Chicago Marathon a little bit slower than I had hoped, but was thankful to be injury free.

I really love hard, teeth-gritting workouts more than chill, low-impact ones. There was a time I could do them back-to-back-to-back. And sometimes I still can if I’m having a good week. But other times, I make the conscious decision to scale back because I’m in pain from a previous workout. That might mean have to do a few fewer reps today or pick up lighter weights tomorrow. But I’d rather do 12 strong, solid reps than 15 wobbly, pathetic ones that end up tweaking my back because my form was so terrible.

A younger me would have scoffed at this weak person who isn’t strong enough to push through the pain. When in fact, I’m learning how to truly listen to my body and check myself on when it’s time to stop or scale back.

My The Biggest Test of Strength Yet

I recently blogged about how I was excited to mix up my gym routine and try something new. That something new was Jonathan’s tabata class at Bucktown Athletic Club. A couple weeks in, I was really digging it. The high-intensity HITT training is different than most workout formats I’ve followed before. I felt like I was on the path to getting much stronger and losing a few ell-bees.

Then my outdoor steps froze over with black ice. One Sunday night I slid down those steps like Marv on the McCallister's basement stairs. It hurt really badly. But I figured the pain would numb quickly enough that I could get back to the gym in no time. I’d still make it to tabata that upcoming Tuesday.

Ultimately I decided to take a whole week off of the gym entirely because my lower back was not feeling so hot. A younger me probably would have sucked it up and just suffered through whatever was going on with the back thing. After all, I wouldn’t want to miss out on a whole week’s worth of workouts and set myself back.

But the wiser, more conscientious adult me decided that setting myself back in the short term was the right decision to make for my long-term health. I decided that pushing through the pain simply was not worth it. I needed to relax and heal, not make it worse.

This was a really hard decision for me to make, but I know it was the right one. And it definitely was not a weak one. I wasn’t giving into the pain. I was accepting that this pain was a thing that happened, was out of my control and would go away more quickly if I gave it time instead of making it worse.

Do you have your own “pushing through the pain” story?

5 Nutrition pitfalls that hold you back

Can Pilates Help Correct Your Posture?

Time is a Thief: the importance of Sleep Length, Quality and Rhythm