If anyone out there has a friend or family member into rock climbing and has no idea what to get them for Christmas, our Climbing Director Mary Beth Payne has put together 6 great ideas at a wide range of budgets for you to bring joy to your climbing buddy this season!

($0, Priceless value) As someone who is usually either climbing or belaying someone who is climbing, I treasure any pictures of ME climbing!! For those of you with climbers in your lives, I encourage you to go with them to one of their climbing sessions at the gym and get some great photos or videos of them climbing! You can frame them, make a slide show, put the video to music – they'll love being able to watch themselves in action, which we climbers rarely get to do! 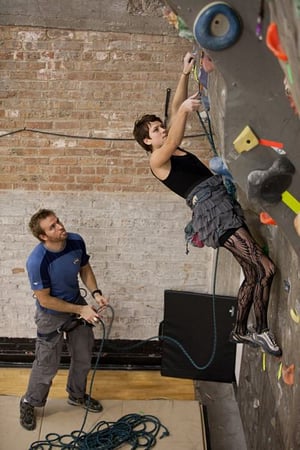 (about $35, Priceless value) Come and share the adventure of climbing with a loved one! Even if climbing is not your sport, if the person you care for is passionate about it, the effort and courage you show by sharing time and their sport with them will earn you boundless bonus points, and plenty of good cheer.

($5 – 16, practical giving) Climbers use their hands a lot, and our skin gets very beat up. Female and male climber alike, have been known to feel a bit embarrassed over the appearance of their hands. Nivea Hand Cream – in the tin, NOT the pump – is the cure. This cream makes even the most dried out, and tired hands, look refreshed and revived. I love this stuff. But only in the tin! The good stuff is too thick to be pumped through a plastic tube.

($10-15, practical giving) Something a climber can NEVER have enough of is chalk. The higher end stuff comes with various scent options, but most climbers I know like the basic Black Diamond chalk that comes in a zip-top bag. This gift might feel uninspired, but it makes a great stocking stuffer, and they’ll be glad they got it.

($45 - $85) Perhaps the climber in your life has everything they need, or maybe they’re trying to reduce the “stuff” they have in their lives – a membership in the American Alpine Club might be the perfect gift. The newly opened Chicago chapter of the AAC is very active in outdoor adventures, and seeks to diversify both their membership and the activities they lead. Membership in the AAC is a gift that will keep giving with trips, classes, and discounts offered throughout the coming year.

($150) This one’s for the hard core climbers out there, who are above the age of 13 (there’s cursing in many of the films): Reel Rock – The Complete Collection. While slightly misleading, since this collection does NOT include the most recent Reel Rock 14 film, this collection of rock climbing movies is a gem. Watch Chris Sharma when he was a young gun going for his early hard sends in Spain; then see Sharma a decade later be over-taken by the up-and-coming Adam Ondra, as Ondra beats Sharma to the first ascent of La Dura Dura. Watch Margo Hayes cause jaws to drop – literally – as she flexed her way up La Rambla, to become the first female to send a 5.15 (an accomplishment she’s since repeated). Watch Alex Honnold fall off a sport climb! Seriously, it happened. He was on a rope, but still. These films are exhilarating, hilarious, heart-racing, breathtaking, and awe-inspiring...but keep that stocking-stuffer chalk handy. Your hands will be sweating as you watch!!

10 Ways that Indoor Rock Climbing can help your kid